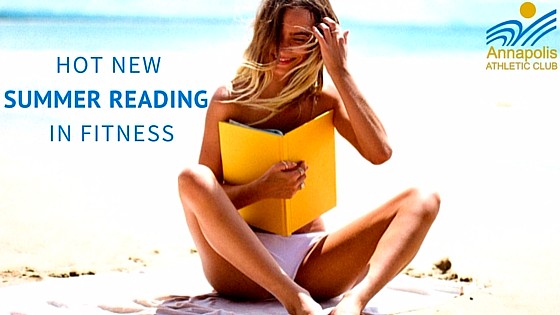 Now that summer is officially here, it is time to kick back and enjoy one of the season’s annual rites of passages, whittling the long days away in the sun enjoying a good book. But just because you’re lounging by the pool or the beach doesnt mean you can’t get motivated or inspired. We checked in with Amazon and found the top ten Hot New Releases for Exercise and Fitness Books This Summer.

This is your ultimate guide to full body fitness without weights. The “Street Workout” supposedly can rstore your primal power and reclaim your inner beast! According to the Kavadlos, working out should be fun, adventurous, primal and pure. And no training style embodies those elements quite like Street Workout. The outside world becomes your total gym–you roam free to get stronger using simply your own body and the environment at hand.

M.E.R.C. is the new nutrition book which covers all the vital aspects of dieting and weight loss. M.E.R.C reminds us that there is more to a great body and being fit than working out. M.E.R.C. shares reserched information on the perfect times of day to work out, foods to avoid, healthy recipes and  ways to break bad eating habits.

Michael Boyle, one of the world’s leading sport performance coaches, presents the concepts, methods, exercises, and programs that maximize athletes’ movements in competition. A series of functional assessments help in determining the design of a specific plan for each athlete. Self-reinforcing progressions in exercises for the lower body, core, upper body, and ultimately total body give athletes the balance, proprioception, stability, strength, and power they require for excelling in their sport.

4. Today We Die a Little!: The Inimitabl…

For a decade after the Second World War, Emil Zátopek—“the Czech locomotive”—redefined the sport of distance running. He won five Olympic medals, set eighteen world records, and went undefeated in the 10,000-metre race for six years. In the darkest days of the Cold War, he stood for a spirit of generous friendship that transcended nationality and politics. Zátopek was an energetic supporter of the Prague Spring in 1968, championing “socialism with a human face” in Czechoslovakia. But for this he paid a high price. After the uprising was crushed by Soviet tanks, the hardline Communists had their revenge. Zátopek was expelled from the army, stripped of his role in national sport, and condemned to years of hard and degrading manual labor.

World-class marathoner and 4-time Olympian Shalane Flanagan and chef Elyse Kopecky are the authors of this  whole foods, flavor-forward cookbook. A cookbook for runners stating that fat is essential for flavor and performance and that counting calories, obsessing over protein, and restrictive dieting does more harm than good.

The  ‘Four Pillars of True Health’. With over 175 gluten-free and Paleo-friendly recipes, a 28-day food and fitness plan, portion guides, program guides and supplemental online tools.

The true story of Muhammad Ali fighting in a mixed-rules contest against iconic pro wrestling champion Antonio Inoki for the so-called “martial arts championship of the world.” The match was broadcast from Tokyo to a potential audience of 1.4 billion in 34 countries, the spectacle foreshadowed and, in many ways, led to the rise of mixed martial arts as a major sport.

Joe De Sena designed the Spartan races to test overall conditioning: strength, flexibility, endurance, and speed. His signature take-no-prisoners approach to achieving physical and mental fitness has taken the endurance world by storm and inspired millions. Now in Spartan Fit!, De Sena breaks down that approach and gives readers the tools they need to conquer the course — and life.

An ultra marathoner and running coach captures the energy and joy of running in this illustrated, full-color motivational interactive fitness guide and journal that will inspire every type of runner—from beginner to experienced marathoner—to shut up and run.

Improve your athletic performance, extend your athletic career, treat stiffness and achy joints, and prevent and rehabilitate injuries. In Becoming a Supple Leopard, Dr. Kelly Starrett—founder of MobilityWOD.com—shares his revolutionary approach to mobility and maintenance of the human body and teaches you how to hack your own movement, allowing you to live a healthier, more fulfilling life.